Oh, yes….there is just one thing I neglected to mention about aging: There is loss and death in it. (Wait, Wait! Come back!)

Here in my musings on my life as a woman in my sixties, these years that are considered by some to be “the youth of old age,” I have somehow left something important out: I have completely ignored the losses that we experience as we age—in particular, I have neglected to mention Death.

A little over a month ago, my younger-by-ten-years cousin Judy died. Until this time, I think I was in denial that death would really touch my doorstep. Yes, she had been sick; but we in the family believed that she would get better.

She had what people in-the-old-days used to call “The ‘C’ Word.” The world I grew up in, then, treated Cancer as if it were a curse (rather like diseases of the brain and nervous system are treated by the sadly uninformed, these days).

There was shame connected with being struck with ‘C’. Perhaps it was thought that ‘C’ was contagious; or that news of it in the family would make the rest of us unmarriageable. Or it may have been superstition that silenced any talk of cancer—the belief that if you didn’t talk about something, it didn’t really exist and thus it could never happen to you.

The amazing thing about my cousin was the truthful and open way she coped with her “C,” her cancer. It was as if she had been dealt what has been often considered to be an ugly fate, but that with her magical calligraphy pen she transformed it into a lesson–a meditation on the preciousness of living and dying–without leaving out the painful emotions and experiences she suffered.

So that even through her losses—perhaps especially because of these losses, she mindfully embraced the “little things” that aren’t so little, the beauty in life that many times I have overlooked or taken for granted.

As my cousin Judy Sue (“The Other Cousin Judy,” as she calls herself) has said to me, “Judy must not have had the anxiety and depression gene that you and I share!”

My cousin wrote her poetic and profound blog, “Word of Mouth,” right up until her last days. In it she documented her experience of hope and loss, never seeming to linger on feeling sorry for herself. In this way, Judy gifted those of us left behind with a legacy of courage and of gratitude.

These blog entries became her voice when she could no longer speak. They became our (her family and dear-friends) way to connect with her when we couldn’t see or support her—though we longed to.

She wrote of the bud vases she created out of miniature apricot juice bottles and of the loveliness of her garden and of the antics of Audrey, her cat. And she shared the joy in carefully preparing a  meal for guests, even after she herself could no longer eat solid food.

She told, in her blog, how she would put a little of her much-admired chicken soup or banana bread into the juicer so that she could take in some of what she had prepared along with her guests.

She spoke of her daily walks around the neighborhood and admitted (you can just see her impish smile, here) she guiltily plucked a lemon off of a neighbor’s many-lemoned tree. She reported that just as she did the lemon tree owner drove up in her car and yelled at her.

Now, if you saw a woman with a pad and pen around her neck, my guess is you would
take a moment, understanding that perhaps this woman had a difficulty that was challenging and that you could, perhaps, spare a lemon for such a person.

Judy blogged that she could not resist the urge to laugh, though she wrote an apology on her pad, explaining that she was a neighbor and then writing: “If I had a lemon tree with this many lemons, I would want to share them.” But Lemonwoman was merciless, shooting back: “I do share them, I share them with my friends!”

Judy told her experience to Allen her husband. (And how much she adored and was adored by her husband and her children, her beloved brothers and sisters-in-law. Oldest brother Mike and sister-in-law Marlene and their grown son Johnny were closest, living only blocks away! But she was close, too, to her brothers Chuck and Stu and her nieces and nephews and cousins and dear friends–But, I know, here I digress…)–Perhaps The Lemon Tree Incident, as some of us–her blog-followers have come to call it, made her aware that, despite her swollen cheeks, her inability to speak, and having a very short time to live—there were people in the world who were far less fortunate than she was.

Upon leaving the synagogue where Judy’s memorial service was held, I said to my sister Susan, “You can bet that if I were given the diagnosis of a debilitating and disfiguring cancer that would eventually take my life, I’d be a royal pain-in-the-ass! I’d be cvetching and obsessing and taking every numbing med I could get my hands on!”

“In fact,” I continued, “I might take them all at once, just to get it over with!”

She replied, “And that’s why you and I are still here; we haven’t learned our lessons on earth yet.”

Hmmpf! I really hate it when my sister is right!”

What I have most feared about growing older, personally, and thus avoided here in my stories of life in my sixties, was the very thing my cousin seemed to embrace. Her way of living out her life, even in the challenges she faced made illness and death seem not quite as frightening.

Judy went through that first operation which altered her voice. Instead of bemoaning her loss, she shared being almost-tickled by her “practically English accent” (as her sister-in-law Marlene dubbed it.) And she dressed the long scar left on her throat with a variety of multi-colored scarves.

The next operation took her capacity to speak at all and her ability to eat—and it left her facing imminent death anyway.

Given the person Judy was, I can’t imagine the pain of the doctors who had tried so hard and yet had to give her the news that they could not save her life. They must have gone home and wept.

Still, Judy was not to be silenced. She used her voice in her writing, appreciating the beauty in life and keeping concerned family and friends posted on her treatment status. Read her on a day you’re feeling sorry for yourself and I dare you not to feel at least a little bit embarrassed.

In this way, she was able to rise above a self-involvement that would have been understandable, if not expected. And, doing so, she continued to comfort the many who cared for her.

Once she lost her speech, Judy wore a pad and pen around her neck, later to be replaced by an erase-board, and when possible, it was supplemented with a computer with its own voice. Even this loss she greeted with humor, donning one board for her good days and one for her bad; teaching us that even in the most dire of circumstances, one can still laugh and play and not take ourselves quite so seriously.

I admit I have, too often, not lived mindfully in the moment–rather I was preoccupied with some matter that seemed important at the time, feeling lonely or sorry-for-myself; worrying about this or that–some decision or relationship past, present or future–Not taking notice of the new buds in my garden or the changing of the leaves.

Judy Samuelson did not have as many years to live as we tend to expect these days. But, for those of us who loved her she left such an exquisite gift-even, and perhaps especially in her last four years, from when her cancer was first diagnosed, until when she took her last breath, she lived a life rich beyond most and taught lessons that can only be taught, as our cousin Stu* first noted, by Bodhisattvas; advanced souls who’ve come to teach us mortals great lessons. 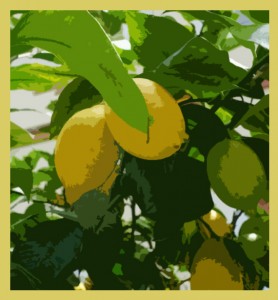 In these last years, Judy used her sharp mind, her unscathed sense-of humor and her creativity to assuage our pain in even comprehending her loss among us.

In living and sharing her end-of-life experience the unique way she did, it was as if (as several of her friends had noted) she seemed to instinctively know that with the lemons she had picked–though certainly not the ones she would chosen, were she given the choice—with these particular lemons—still, and maybe especially—she could continue caring for others, leaving us with some truly unforgettable lemonade.

Note: My sincere apologies to those who shared some of these same thoughts on blog-comments or at Judy’s memorial service–I am sure that I was not the first to have or speak the same or similar observations about my cousin. (In Other Words: None of this was purposely stolen! Rather our like thinking whoever said it first,  proves how all of us are really connected!)