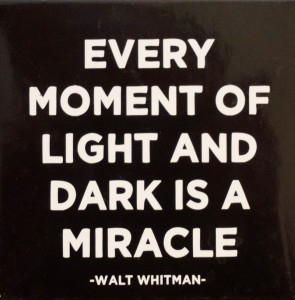 I had just passed my 32nd  birthday, and it had occurred to me that some of my adolescent dreams of what life was going to be were not likely to come true.

I comforted myself with chocolate and by gazing blankly out my Levitt-development, Jamestown-model kitchen window. What I knew for sure was that, although I loved my husband and our two young sons, as well as most of the responsibilities and festivities of being part of a family, the course of New Jersey suburban housewifery–however noble–was just not for me.

Reading voraciously in trying to get a handle on some of my dreams, I was attracted to the short stories and novels of Isaac Bashevis Singer. This, because of our common ancestry: a long line of religious Polish Jews.

I threw my ennui into “Gimpel the Fool” and Yentl and all the Singer characters torn between themselves and others, love and lust, worldliness and asceticism, art and tradition.

With the gift of his years and his historical perspective, Mr. Singer seemed to understand human ambivalence. I read him in the hope that he would cast some reflected light on mine.

When he won the Nobel Prize in Literature, I followed the publicity, read all the articles and saw him on television.

Mr. Singer had suggested that an author could be less interesting than his work. To me, in reading about him in the Arts Section of the New York Times and seeing him on television, he became more interesting:

Dick Cavett: “Mr. Singer, you once said that your wouldn’t go out of your way to meet Tolstoy.”

Mr. Singer:   “I might go across the street, but I wouldn’t go to Queens.”

Cavett: “I understand that you are a vegetarian. Is this for reasons of health?”

Singer: “It is for the health of the chicken.”

Cavett: “Mr. Singer, many of your characters are religious Jews. Are you religious? How do you feel about the ten commandments?”

Singer: I think that with nine of God’s commandments, I would still agree.”

His haemischer* wisdom was obviously not confined to his writing. And that accent–that self effacing sweet Yiddish lilt, the self-conscious legacy of the Polish Jew–was just like my grandmother’s.

As crazy as it may seem, I felt a connection with this man, a mysterious and irresistible feeling that either I had known him somehow or that he had an important message for me. Either way, I had to contact him. So, I sat down at my kitchen table, and typed the following letter on my Sears Manual typewriter:

I am not at all sure I believe in this, but I feel, from seeing you on television and from reading your stories, that I’ve known you before.

My grandparents were from Grydyk, a little town outside of Warsaw. Their family names were Pomerantz and Lieberman, and they were (and still are) very observant Jews. But I am 32 years old and have never been to Europe, or any place where we could have met.

I really am not a nut. Nor am I seeking contributions, interviews, photographs–anything, other than to explore this feeling and my accompanying compulsion to write to you.

Please write if it would be at all possible for me to meet with you.

I considered the futility of sending a message to a famous author, and I made a final impulisve gesture, scribbling my telephone number as a postscript. Not knowing his address, I sent my note to his publisher.

Then I forgot the letter and resumed my Hebrew school-to-soccer field suburban car-pool route and the preparations for Hanukkah.

(Part Two: I get a telephone call. Really!)