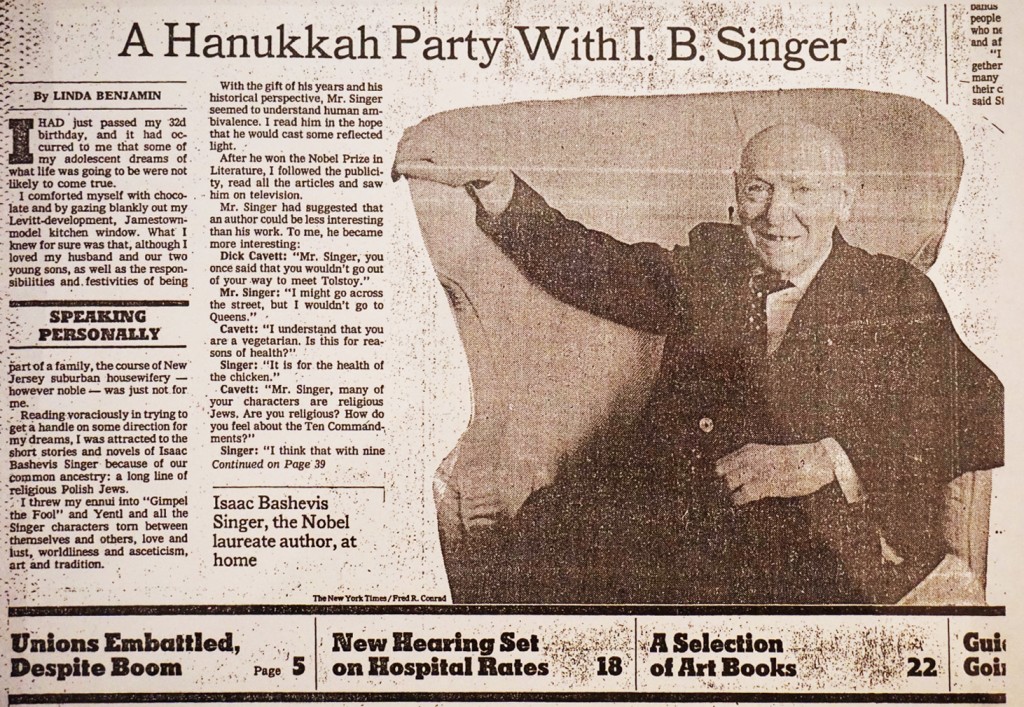 I’ve always loved it when Christians and Jews celebrate our holidays together. Everybody feels festive.

On this first night of Hanukkah, which was also Christmas eve, our house smelled of cinnamon and peanut oil. I was making applesauce for the potato latkes* that my husband and sister were working on for the family party that was to begin in a few hours. Between applesauce stirrings, my sons and I danced around the table to some Russian balalaika music.

A ploy to buy a newspaper that I already subscribed to?

A free estimate from a carpet-cleaning company?

“Linda Benjamin Kline? said the unidentifiable, yet vaguely familiar voice. (A Polish-Yiddish accent. Perhaps a long lost relative, a Holocaust survivor who had somehow traced the family from Grydyk to Chicago to Skokie, Illinois to me.)

“Yes?” I responded quizzically, motioning for someone to turn down the music.

And then, “This is Isaac Singer.”

“How else shall I be calling you?”

I don’t remember the rest of the conversation, but the gist of it was that, if I wanted to meet him, I could come to his home. Now.

Strange how you wait for something you’ve dreamed about to happen, and when it does you wish you had more time to get ready.

Maybe I should prepare some questions? Look over his books? Lose some weight?

What to wear? And what to bring for Hanukkah? It was Christmas Eve and all the stores were probably closed.

Hadn’t I told her, my sister said, that Mr. Singer was a vegetarian, and so why not bring him a plate of homemade latkes and applesauce? the bag was warm in my hands as I left my own family party to drive to Mr. Singer’s home in New York City.

I climbed the four flights to his door, then knocked. He answered himself. Staring at him nonplussed and needing time to collect my thoughts, I stammered my first words:

“M-m-may I use your bathroom?”

He smiled kindly and gestured for me to follow him.

In the high-ceilinged, unpretentious Old/New World living room, I sat, wordless, on the sofa. I had seen this very room in The New York Times Magazine, and now here I was in the picture. I couldn’t manage a coherent sentence.

“Oftentimes,” he said sympathetically, when I told him how nervous and disbelieving I felt (and I am paraphrasing here), “when I was a younger man, I would fancy a woman, desiring her from afar.

“I would dream about meeting her, and perhaps sometime later we might actually meet. If she fancied me too, we might keep company. Then a time might come when we would make love.

“At that moment, I would ask myself, ‘Am I really here? Is this a dream? Afterwards, perhaps on the way home, it would hit me.”–he slapped his cheek, “‘I did that? That happened to me?'” The truth-teller of Eastern European Jewry had caught at that moment just how I was feeling.

Mr. Singer spoke very little that evening. He listened, really listened to what I, finally relaxed now, had to say, and asked many questions.

And he told me it was a good thing that I had written down my telephone number because he found it difficult answering all his mail. Also, he asked me to come (if it would be all right with my husband, of course) to a Hanukkah party that he was giving the following week for a few friends.

Then, with a paternal peck on the cheek, Mr. Singer led me to the door.

I felt refreshed, lifted out of my ennui, as I glided home on heightened spirits and the powdered-sugar snow that covered the New Jersey Turnpike.

Next: Part Three: A Hanukkah Party With Isaac Bashevis Singer.