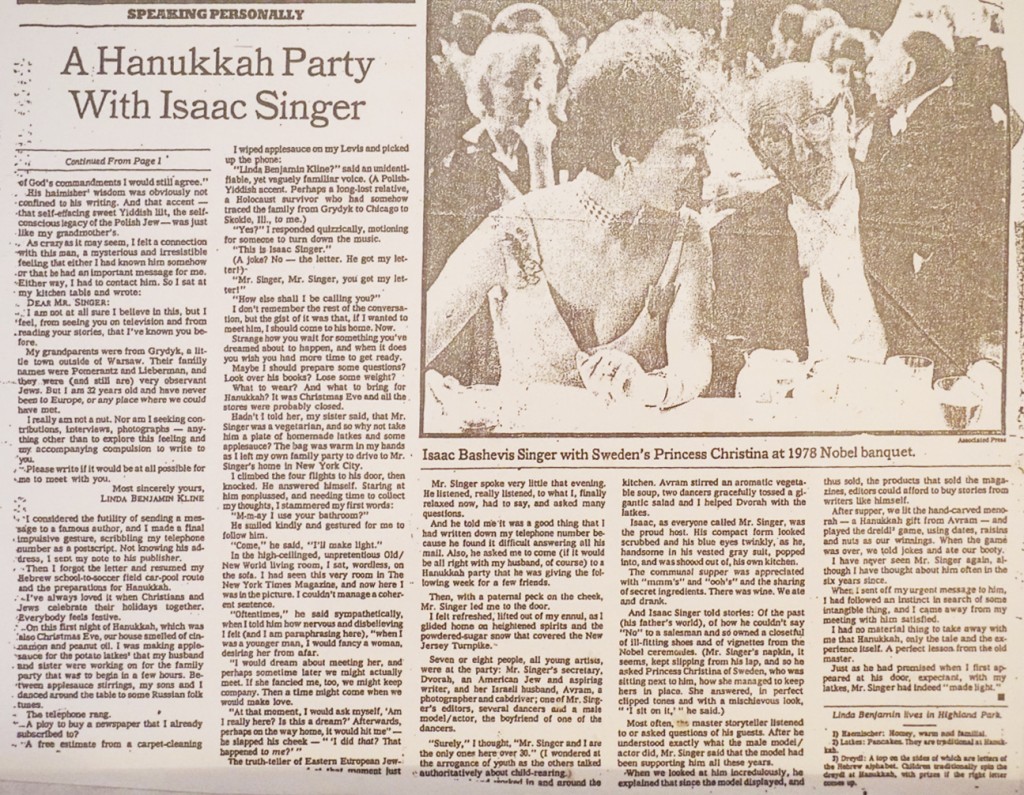 Seven or eight people, all young artists, were at the party; Mr. Singer’s secretary, Dvorah, an American Jew and aspiring writer, and her Israeli husband, Avram, a photographer and New York City cabdriver; one of Mr. Singer’s editors, several dancers and a male model/actor, the boyfriend of one of the dancers.

“Surely,” I thought, “Mr. Singer and I are the only ones here over 30.” (I wondered at the arrogance of youth as the others, none of whom had children, talked authoritatively about child-rearing.)

The other guests worked in and around the kitchen. Avram stirred an aromatic vegetable soup, two dancers gracefully tossed a gigantic salad and I helped Dvorah with the latkes.

Isaac, as everyone called Mr. Singer, was the proud host. His compact form looked scrubbed and his blue eyes twinkly, as he, handsome in his vested gray suit, popped into, and was shooed out of, his own kitchen.

The communal supper was appreciated with “mmm’s” and “ahhh’s” and the sharing of secret ingredients. There was wine. We ate and drank.

And Isaac Singer told stories: Of the past (his father’s world), of how he couldn’t say ‘No’ to a shoe salesman and so owned a closetful of ill-fitting shoes and of vignettes from the Nobel Prize ceremonies. (Mr. Singer’s napkin, it seems, kept slipping from his lap, and so he asked Princess Christina of Sweden, who was sitting next to him, how she managed to keep hers in place. She answered in perfect clipped tones and a mischievous look, “‘I sit on it,'” he said.)

Most often, the master storyteller listened to or asked questions of his guests. After he understood exactly what the male model/actor did, Mr. Singer said that the model had been supporting him for all these years.

When all around the table looked at him incredulously, he explained that since the model displayed, and thus, sold, the products that sold the magazines, editors could afford to buy stories from writers like himself.

After supper, we lit the hand-carved menorah–a homemade Hanukkah gift from Avram—and played the ‘dreidel’ * game, using dates, raisins and nuts as our winnings. When the game was over,  we told jokes and ate our booty.

I have never seen Mr. Singer again, although I have thought about him often in the six years since.

When I sent off my urgent message to him, I had followed an instinct in search of some intangible thing, and I came away from my meeting with him satisfied.

I had no material thing to take away me that Hanukkah, only the tale and the experience itself. I think what I learned was something about miracles; that a suburban housewife, without connection or fame, could send a letter to a Nobel Laureate and have it answered–a perfect lesson about the Festival of Lights. That, even in modern times, it is possible for an ordinary person to manifest a miracle.

Just as he had promised when I first appeared at his door, expectant, with my plate of latkes, Mr. Singer had indeed “made light.”

*dreidel-a top, the sides of which have Hebrew letters, which together form the acronym for “a great miracle happened there.” The letters also form a mnemonic for the rules of a gambling game played with a dreidel. One letter stands for the Yiddish word for “nothing”; another for “half”; another for “all” and another for “put in.”